My Top 10 Countdown to Halloween Posts From Previous Years

I only have one day off from work this week, which is cutting in to my blogging time.  In order to get back on track for the rest of the week (I need to do three more monster toy photo shoots, plus watch and write about a handful of movies, and then put them all together into a bunch of blog posts) I'm going to be looking back at my most popular posts from previous Countdown to Halloweens.  After this, it should be all-new toy and movie reviews through the rest of October.  But for now, allow me to introduce... THE GHOST OF HALLOWEEN PAST!

10. Planet of the Vampires (1965)
http://misfitdaydream.blogspot.com/search?q=planet+of+the+vampires
Horror and sci-fi are two great tastes that taste great together.  Like the Reese's Peanut Butter Cups candy that I stole that line from, Planet of the Vampires tastes delicious, even if it is full of empty calories. The plot of the film is a weird mishmash of sci-fi and horror that is pretty much just an excuse to throw together a variety of elements like aliens, ghosts, spaceships, reanimated corpses, fistfights, laser battles, and mild amounts of blood and gore, all into one movie, with a corny "twist" ending to top it all off.  The story doesn't amount to much, but it all looks fantastic, filmed by Mario Bava with hypersaturated color in a 1960s pop art comic book style.  There's not much depth to this movie at all, it's pretty much all on the surface, but the surface elements are so much fun that it's still worth the trip. 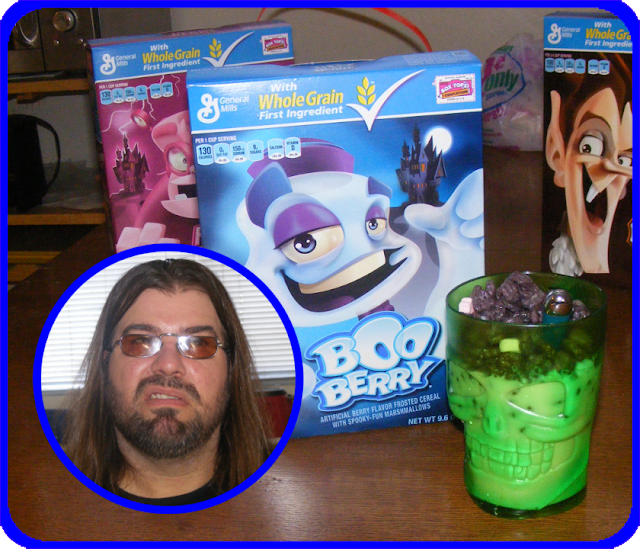 Speaking of empty calories, my ninth most popular Countdown to Halloween post is "Monster Cereal Taste-Off," wherein I consume bowls of Boo Berry, Franken Berry, and Count Chocula, and discover that eating this stuff as an adult doesn't quite live up to my memories of eating it as a kid.

8. The Hardy Boys and Nancy Drew Meet Dracula (1977)
http://misfitdaydream.blogspot.com/2012/10/the-hardy-boys-and-nancy-drew-meet.html
Frank and Joe Hardy travel to Europe to look for their missing father, and find themselves going undercover as rock singers performing at The Castle Dracula in Transylvania in order to crack the case! This bizarro two-part episode plays a bit like a Hardy Boys feature film, and guest stars Paul Williams as one of the other singers at the concert, who performs songs from The Phantom of the Paradise.  It also has Elton John's songwriting partner Bernie Taupin acting as another rock singer, and finally features a very special guest appearance by Lorne Greene as Dracula.  That's right.  LORNE GREENE.

I think this was initially conceived as a "time-saving" post (kind of like this one).  I had a bunch of screencaps left over after I finished my review of The Bride of Frankenstein, so I decided to upload them in their own post.  Lo and Behold several years later, this post that I spent a few minutes on gets about 10 times as much traffic as the one I spent hours writing and rewriting.

6. Saturn 3 (1980)
http://misfitdaydream.blogspot.com/2012/10/saturn-3-1980.html
Saturn 3 was a sci-fi horror movie that seemed to be inspired by Alien, but with a killer robot instead of the Xenomorph.  I'd like to think the reason this post is so popular is because of the great review I wrote for it, but the search keywords that send visitors to this page are primarily from people searching for "Harvey Keitel Nude," "Kirk Douglas Nude," and "Naked Men Wrestling."

Frankenstein's Monster is my all-time favorite movie monster, so I'm glad to see that my review of this film is popular enough to make number 5.  And no, it's not from people searching for "Naked Frankenstein Wrestling."

Number 4 on my list belongs to "The Ghost in the Invisible Bikini," the last film of AIP's "Beach Party" series.  At this point the Beach Party formula was getting pretty stale, and they had lost the stars of the previous films, Frankie Avalon and Annette Funicello, so the producers decided to shake things up by changing locations from the beach to a haunted house.  The result was a hybrid horror/teen musical/comedy flick that is pretty dumb, but still fairly entertaining.  Similar to "Saturn 3" the popularity of this review seems to come as much from people searching for pictures of "Naked Ghosts" as it does from people who are actually interested in the movie.

3. Jimmy Olsen is a Sweet Transvestite
http://misfitdaydream.blogspot.com/2013/10/countdown-to-halloween-2013-jimmy.html
In 2013 I did a series about Jimmy Olsen's greatest costumes and disguises, and this entry about Jimmy's many adventures disguising himself in women's clothing is by far the most popular (number two is "Jimmy Olsen Disguises himself as a Baby Girl").  Many people find it via Google Images after viewing this picture of Jimmy Olsen dressed as a woman while getting his face licked by a Great Dane.  Make of that what you will.

A top 10 list within a top 10 list!  I think my brain is going to explode!  Frankentoys is my top 10 list of vintage Frankenstein toys from the 1960s, '70s, and '80s.  These are all toys that were inspired by or feature Frankenstein's Monster, either individually or as part of a line of toys that Frankenstein was a part of.  This is also one of my personal favorite Halloween posts, so I'm glad to see it's popular enough to make it to number 2.

1. Breeders (1986) Oct 19, 2013
http://misfitdaydream.blogspot.com/2013/10/breeders-1986.html
Alien rape monsters are on the loose in 1986's Breeders.  Breeders is cheaply made, sleazy trash.   It features amateurish acting, a monster in a cheesy rubber suit, low quality gore effects, and tons of naked women, in a story about alien parasites that rape virgins.  Sometimes, movies like this can be so bad that they are good.  Other times, they can just be boring, offensive, and no fun to watch.  This one has a bit of both... but mostly, it kind of sucks.  If you're curious why a review of this crappy movie can be my most popular Halloween post (it's actually the third most visited post ever on this blog), please reread the description of this movie, then look again at the entries above for "Saturn 3," "The Ghost in the Invisible Bikini," and "Jimmy Olsen is a Sweet Transvestite."  I think a pattern will emerge.

Posted by Joshua Raymond at 9:42 AM

Email ThisBlogThis!Share to TwitterShare to FacebookShare to Pinterest
Labels: Countdown to Halloween 2015